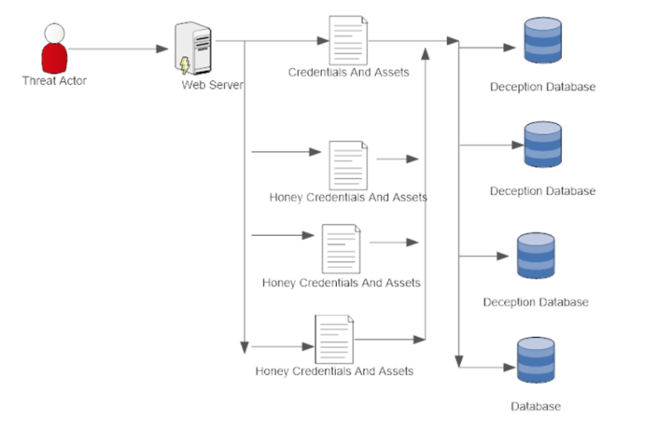 Web Server is becoming one of the critical vector which have been exploited by a threat actor to breach an organization. Breach at Equifax is one such example, affecting 143 million customers. In this breach, a threat actor could access the internal network and exfiltrate the confidential data by exploiting a vulnerability in a Web Server[1]. The blog first presents one of the flow of steps in a breach which involved web server as an entry vector. The blog then presents the deception based architecture which can be used to detect and divert a threat actor to the deception and engagement platform.

As a part of the first step a web server gets compromised which can be done by exploiting remote code execution vulnerability [2] or a SQL injection vulnerability. The next steps involve involves identifying the high valued assets such as databases, FTP servers in the organization which is connected to the web server.

These databases or FTP servers are then accessed either by compromised credentials or by brute force attempts leading to accessing these high-value assets. Figure 1.0 shows the code from china chopper web shell used to connect and perform queries to the SQL server.

Figure 2.0 View for a Threat Actor for a Breach involving Webserver

Figure 3.0 View for an Threat Actor having deceptions in case of breach.

Web Servers are one of the critical assets which have actively been used by threat actor for breaching an organization and compromising the critical data. Distributed deception centric architecture provides a definite manner for detecting breaches which involve web server as an initial entry vector. The architecture also ensures that there is no extra computational overhead on the web server making it a recommended or rather a must detection architecture to prevent the breach involving web servers as an entry vector.