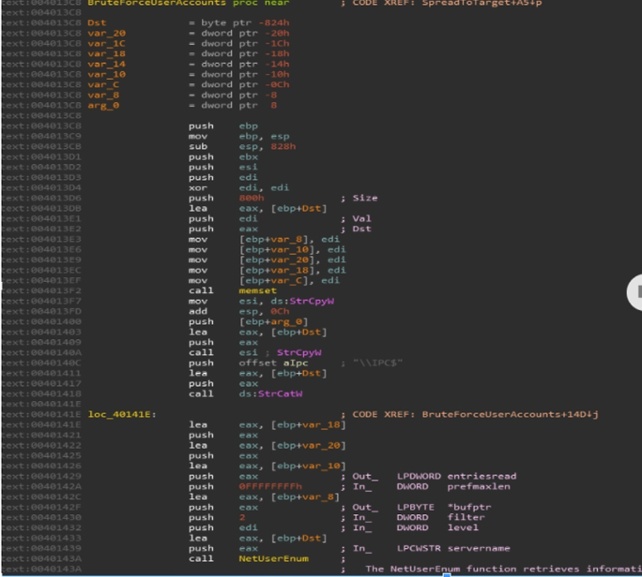 Emotet is one of many information stealer malware families which have been active in the recent months. The initial delivery vector of the malware is via phishing campaign. The blog by TrendMicro[1] and Microsoft[2] discusses the first stage infection of the malware and shares statistics on the global infection. Once a corporation has been infected with Emotet, it can spread throughout the internal network. In this blog we detail the lateral movement technique which have been employed by the malware and its detection by a deception-based architecture.

If lpUserName is NULL, the function uses the default username. The user context for the process provides the default username. If the password is NULL, the function uses the current default password associated with the user specified by the lpUserName parameter. By specifying these parameters as NULL, Emotet makes uses of username and password of the current user to connect to the resources.  This methodology is the same as that employed by many families of ransomware for infecting unmapped drives.

As a second method to spread inside the compromised network, Emotet makes the call to NetUserEnum API. The server name value passed to the NetUserEnum function is appended with “//IPC$,” which it gets it from the NETRESOURCE structure from the earlier call to WNetEnumResourceW. The function NetUserEnum returns all the usernames which are active on a server.

If the first two methods fail to authenticate, Emotet will attempt a brute force of the user “Administrator” with the same password list as used in method 2.

Once it has been able to connect to the server, it makes a copy of itself on the target computer.

After copying itself to the target computer, it opens service manager and creates a service with API call CreateServiceW, using the copied file as a parameter.  StartServiceA  is then made to is to execute the malicious file.

Detection of emotet involves projecting honey unmapped drives. Network enumeration will generate SMB request to the unmapped drives leading to its instant detection. Below is the screenshot of the detection in the ShadowPlex.

When the files gets copied to the unmapped drives, it will lead to the engagement of the Emotet malware and will trigger the process to isolation  the infected endpoint from the network.

Lateral movement and spreading inside the network is one of the widely and commonly used techniques by threat actors. Emotet not only enumerates and tries to access the drives by using the username and password of the infected user, but also gets the username which is active on a server and then brute forces the passwords.

IoC of the analyzed file :